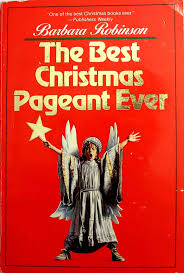 The Best Christmas Pageant Ever is one of the most beloved Christmas-themed children’s books ever. You’ve probably heard of it, but did you know there are two more books in Barbara Robinson’s charming series?

In case you haven’t read them, let’s start with The Best Christmas Pageant Ever, which is the first in the series. While technically a children’s book, the humor, the distinctive voice, and the richness of its ideas make it a classic for adults too. I’ve given this book as a gift more times than I can say, to friends, to the children and grandchildren of friends, to my hairdresser, and to one of my ballroom dance instructors.

The narrator, 6th grader Beth Bradley, begins like this:

The Herdmans were absolutely the worst kids in the in the history of the world. They lied and stole and smoked cigars (even the girls) and talked dirty and hit little kids and cussed their teachers and took the name of the Lord in vain and set fire to Fred Shoemaker’s old broken-down toolhouse.

The one place that’s safe from the Herdman 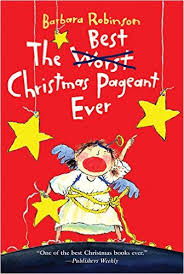 s is church. Unfortunately, Beth’s brother lets slip that they get candy in Sunday School, and who should arrive that next week but the Herdmans? To make matters worse, it’s the day of auditions for the Christmas pageant, and they manage to horn their way into all the leading roles. None of them have ever heard the Christmas story before, and their questions and antics threaten to ruin the show–or to make it the best one yet. 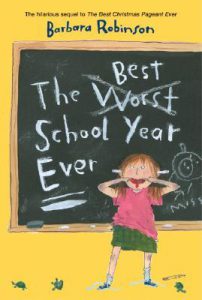 In The Best School Year Ever, the Herdmans return. As wily and uncontrollable as ever, they’re doing their best to live up to their reputation as the “awfullest kids in the history of the world.” Among their misdeeds are attempting to wash their equally horrible cat at the laundromat and “borrowing” a baby, tattooing his head with indelible ink, and charging other children for a peek. When their teacher assigns a school project in which students must draw names and come up with a compliment for the classmate whose name is drawn, Beth draws Imogene Herdman’s name. This book about finding the good in everyone is only slightly less charming than its predecessor. 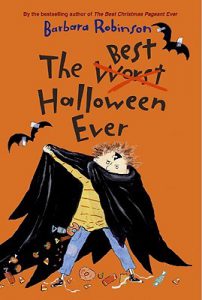 In the third and final book in the Herdman series, The Best Halloween Ever, the mayor, anticipating the Herdman’s usual Halloween chaos, cancels the town’s Halloween celebration. Instead of the usual trick-or-treating and eating candy until you’ve made yourself sick, there will be a tame, boring party at the school. The kids at Woodrow Wilson Elementary are not happy about this. As the holiday approaches, the Herdmans are lying low, which just makes everyone wonder what they’re up to. The answer is as hilarious as anyone who’s read this series would expect. Admittedly, this book lacks the thoughtfulness of the first two books, but it’s still a fun romp.

Have a question, request, or concern you'd like me to address? Email me at: Beth@childrensbooksandlearning.com. I'd love to hear from you.